As we continue to end our interview series, here’s a few words from our amazing Sales and Marketing team! We hope you enjoyed this series and have gotten to know us a little better over these past few months. We can’t wait to work with you!

A Note From Our CEO: 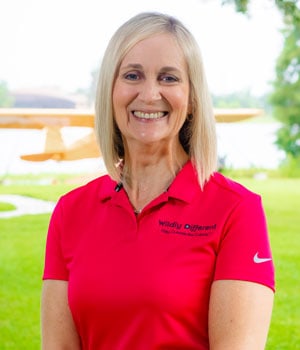 From when Jane and I first met, we would talk about how one day we would start our own team building company. The idea was to keep it small with just the two of us running events. But, I guess we did something right because eventually we had more business than we could handle, so we slowly started adding onto our team. It’s the one thing we are both the proudest of – our team. We are a family that cares passionately about each other and producing incredible events that blow our clients’ socks off.

One of my favorite team events was the all-day, Amazing Chase at Sea we produced for a client who bought out a cruise ship for training at sea with 2,500 employees.  We created totally custom challenges that wove in information about their company.  The biggest challenge?  We were only allowed to bring 4 people on the ship to run the event!  We trained ship crew, meeting planning staff, and company managers to help us implement the event and it went off without a hitch!

One of my best tips learned throughout the years, is to smile and carry on.  When you conduct events anything can happen.  It’s your reaction to it that matters.  You can let it get the best of you, or you can go to plan B, plan C, and make the most of it.  One of my funniest stories involves a team building event we did on the beach.  We unloaded the van on the beach and it got stuck in the sand.  And then the tide started coming in.  I resigned myself to the fact that it would next be seen in Cuba, as we tried everything to get it out.  Not even AAA could help!  The whole time I had to lead the event and I was happy as could be on the microphone while doing asides to my staff to try and solve the problem.  At the eleventh hour, a beach tractor happened to come along and pulled us out – what a relief!  But, the client never knew anything was wrong! 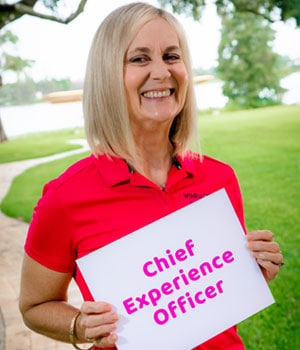 Why I love teambuilding…

I fell in love with the notion of playing for a living when I was at Florida State University (go Noles!). My back was against the wall, as it was time to pick my major and I had NO idea what I wanted to be when I grew up. Luckily, a new roommate was assigned to my dorm room and she told me she was a Leisure Services & Studies major (a fancy name for Recreation). I couldn’t enroll fast enough and I was one of the lucky 40 that got selected for that major each year. I immediately knew this was what I wanted to be in. I actually went to school to learn how to play games and keep people engaged and safe while doing so. Are you kidding me? How great is that?! When I told my parents I picked that as my major, my father said, “What’s that? Are you going to weave baskets for the rest of your life?” Little did he know then that I’d be one of the few people I know who still work in their major. He was eventually very proud of the choice I made! 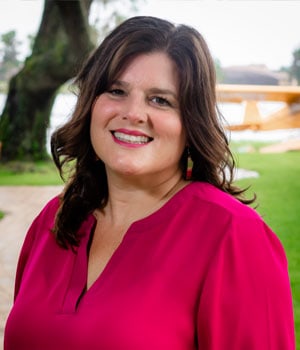 Kerri – Director of Fun and Games

I’ve been lucky in my career in that I’ve been able to continuously work in a role that relates to my college degree – Commercial Recreation. Working for resorts, team building companies, and one of the biggest theme park/entertainment organizations in the world has given me the opportunity to be involved in a lot of exciting programs that create joy for the participants.  Having previously worked with the owners of Wildly Different before they started the company, it was an easy transition when I joined the team.  Since then, I’ve enjoyed the creative aspect of developing teambuilding, networking, and charitable events for a variety of clients.  I love that I get to partner with many of my former colleagues to provide memorable experiences for their clients. My role is mostly behind the scenes which help me keep a good work/life balance and allows me to spend time with my husband and my two sons.  I love to hear from our operations team how our guests responded to our events, especially new ones that I helped develop.  I do enjoy getting out to the events once in a while to see the events in person. 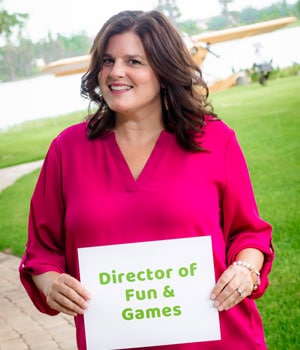 Why I love teambuilding…

One of my favorite parts of an event is seeing the “ah-ha” moments.  I love when a team is struggling to figure out a clue or puzzle and then they finally “get it” and everyone cheers and high-fives.  It makes me smile every time they look at us and say, “Who comes up with this stuff?”  I also love to see the creativity that teams display during events.  No event is ever exactly the same and that is what makes this job so fun. 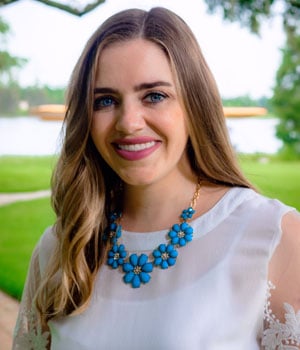 McKenzie – The Manager of Making It Happen

Several years ago, I was producing a Get it in Gear (Bike Build) in Miami.  The Director of the Boys and Girls Club was very excited to bring some of the children from the club to our corporate team building event to receive their brand-new, shiny bicycles.  When we coordinate charity give-back events, we always invite the non-profits benefitting from the event to speak to the group, and emphasize the impact the donation will make.  In this particular instance, when I went to hand the Director from the Boys and Girls Club the microphone, his hand was shaking, and I could tell he was nervous.  I told him to speak from the heart and talk about the difference this donation would make on the children.  His brief story was one I will never forget.

He took the microphone, voice still shaky, and told the group his personal experience.  He became involved with the Boys and Girls Club at a young age when his Mom enrolled him.  In fact, he received his very first bicycle at an event just like the one we were doing.  Though he later outgrew the bicycle he received, it was passed down to his younger brother, and then to his cousin, and that the bicycle was still in his family.  As an adult, he recognized the kindness that was shown to him, and it inspired him to dedicate his work to give back to youth.  Although the children at the event were ecstatic to be receiving a bicycle, he was just as excited for them to understand what true generosity looks like, and the impact it will make on their futures. 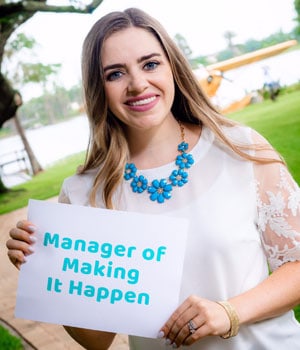 I had a student role in high school as a production assistant where I coordinated talent with major venues.  I thoroughly enjoyed the experience including coordinating the logistics and knew that events were going to be for me.  There are a number of reasons I love events, but two stick out the most.  The first is that we create moments and experiences that bring people together.  The second is the feeling of accomplishment we get on-site when the “hard work” pays off. 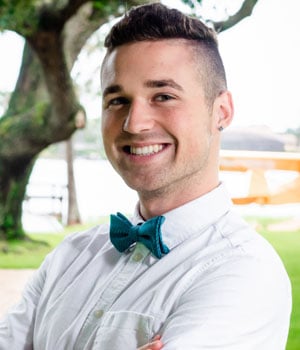 I honestly think my favorite story or “event” was when we were hired just to work some carnival games at a party at a huge mansion in Maitland! The couple who lived there were astronauts and owned a construction company and threw a huge party for a giant elephant statue that took 8 years to make for them. The party was super ritzy and such a cool thing to see. It just shows how great we are to work with! We don’t even have to sell an event and people still want us to help out because they know we can make their party great.

But I guess if you want to stick to an actual event that we sold, I love the SurStrivor we did when it started downpouring and 400 players had to move inside and finish all the team building games. I’m POSITIVE it wasn’t Gaby’s favorite story but I thought it was so fun to see all these people soaking wet and having fun running around the hotel playing games wherever we could set them up. It was chaotic, but it was like watching a bunch of children play in the rain. You’re never too old or too professional to let loose every once and a while! 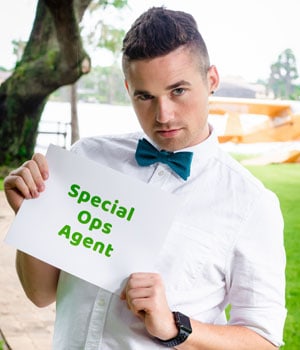 I never knew I would end up doing corporate team building, but I was always intrigued by the entertainment industry throughout my childhood. I didn’t know what I wanted to do, I just knew I wanted to have fun and love what I did. What could be more fun than playing games at hotels and conference centers!? Thankfully I had a best friend who worked with the company and introduced me as staff. The rest is history! 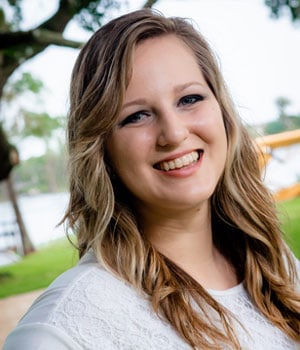 Once we had a Get To The Point teambuilding event out in Washington DC. It was a cold winter day out on the National Mall, but everyone was excited to explore DC! We picked up the teams at their hotel, bussed over to the National Mall, handed out iPads, and away they went! I had so much fun watching everyone explore the mall, learn history and create hilarious memories. I remember one challenge had teams act out the on-site merry-go-round. They “galloped” in a circle for so long that they started getting dizzy and collapsed in fits of laughter. Everyone had so much fun and didn’t want to leave. It was a blast to be a part of and a real representation of what we do here at Wildly Different. 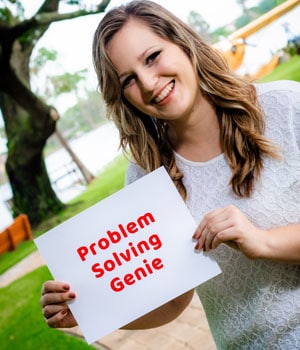 I fell in love with events when I found a job at an event venue when I was eighteen. I loved coordinating the festivities and seeing events come to life. That’s when I realized I wanted to be in this industry forever. I switched to Event Management at the Rosen College of Hospitality Management and I loved every second of it! Throughout college I was with Publix as an Event Planner, coordinating catering orders and wedding cakes that came into the store. It was a great experience, but as I graduated from Rosen I knew I needed something different. I found Wildly Different through an ad sent out in Rosen’s weekly newsletter and thought it sounded like a lot of fun. Playing for a living?! Yes, please! I went through the interview process right before the holidays and was quickly hired as the resident writer. I now write the blogs (yes, I’m the voice behind these words), newsletters, and event alerts. I’m also a part of our sales department where my job entails writing proposals, keeping in touch with clients and, of course, selling events.

I love what we do as a company. We encourage corporate America to leave their cubicles and get to know each other through play. Playing games together creates such a memorable event that they talk about it for weeks to come. I often hear from clients an entire year later still raving about their last team building experience. I absolutely love that!